The Influences and Work of Contributing Artists 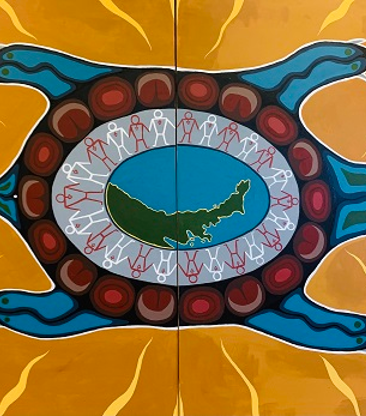 Emily Kewageshig is a talented Anishinaabe artist from Saugeen First Nation No. 29 who captures the interconnection of life forms using acrylic paint, sometimes also working with oil paint, water colour paint and other culturally significant materials gathered from the land. Her work consists of bold lines, bright colours, and symbolism which is inspired by traditional Ojibwe Woodland artists and Indigenous world view.
She graduated from Sheridan College’s Visual and Creative Arts Diploma program with Honours in 2017, receiving the “Best in Show” award at the final graduate exhibition. Having graduated from OCAD University, receiving a Bachelor of Fine Arts in the Indigenous Visual Culture program, ​Emily has opened a studio in Southampton.
A graduate of SDSS and a Downie Wenjack Artist Ambassador, Emily facilitated the collaborative art piece – that all SDSS students contributed to in 2019 and that is at the centre of the Reconciliation Table –  the centrepiece of the space.   This design was created to honour Treaties Recognition Week at Saugeen District Senior School.

Rachel Shave facilitated the artwork at the centre of the Reconciliation Table.  Experimenting with various styles of painting, illustration, and mixed media, the inclusion or subject of nature often unites her pieces. 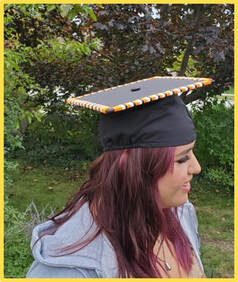 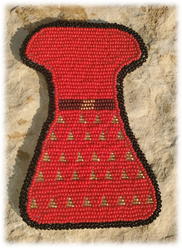 An artist from Saugeen First Nation #29, Keyanna Kimewon's biggest influences are her grandmother and mother.  Keyanna was mesmerized by her grandmother's sewing of sweet grass turtles and birch bark canoes.
Keyanna has been beading since 2011, finding it very relaxing and a great way to connect with her mother and culture.  She loves to look at early beadwork and different floral designs from tribes other than her own, finding that understanding how early beadwork with quills, shells, and bones developed into what it is today is really fascinating.
Keyanna’s stunning red dress represents missing and murdered Indigenous women and girls lost to violent crime and as a call for action to prevent future violence.  The REDress project originated with Métis artist Jaime Black in 2010 who displayed over one hundred red dresses as an exhibit around the University of Winnipeg campus to raise awareness. 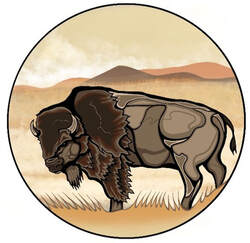 Taylor Cameron is an emerging woodland artist from Saugeen First Nation No. 29. His paintings highlight the beauty of the natural world around us using vivid colour schemes that introduce a different perspective on animals, landscapes, and teachings.  Taylor's use of both movement and line work create balanced compositions that showcase the subject matter that is displayed.
Taylor’s illustrations of creatures that represent the Seven Grandfather Teachings – guiding principles for living a good life - are a stunning addition to the Reconciliation Hall.  Students identified as representing these teachings - of love, respect, bravery, truth, honesty, humility and wisdom - will receive a certificate with Taylor’s artwork at the awards assembly in June.
Respect is represented by the buffalo  who, in giving every part of his being
to sustain the human way of living, respects the balance and needs of others.
Dr. Duke Redbird is an Elder, poet, activist, educator, and artist.
A trailblazer throughout the 60's & 70's, he gave voice to Indigenous people at major institutions and folk festivals across the country. From 1994-2009, he was an arts & entertainment reporter for CITY TV in Toronto.   Dr. Redbird is also featured on ‘Native North America’ which received a Grammy Award nomination for best historical album in December 2015. Duke recently recorded his poem "The Power of the Land with The Sultans of String" – which concluded the virtual assembly.
In 2020, Duke was awarded a Life Time Achievement Award by the Toronto based performing arts organization JAYU in recognition of his influence through his art on Human Rights.  He occupies the position as Elder with many organizations across the country, and delivered a keynote address to MIT on the growing influence if Indigenous Thinking and Practices on the world of technology and higher learning.